The sun, the sea, beautiful weather, and Mediterranean lifestyle, combined with great properties in great locations, are the recipe for a successful business year when it comes to Croatia’s luxury real estate market. The numbers have gone up and are expected to continue growing throughout the following year.

Retrospective of the luxury real estate market in 2018

2018 has generally been kind to Croatia’s luxury real estate market since demands for this sort of property were up by 25 percent compared to 2017. At the same time, the prices of luxury real estate in Croatia rose by 10-15 percent. The average price for a villa ranges between 5000 to 6000 euros for a square meter.

Clients opting for these properties are mostly foreigners, coming primarily from Germany, Austria, the Czech Republic, Slovakia, England, and Scandinavian countries. Also, some inquiries came from Russia and China. The average age of property buyers varies between 45 and 60. Russians and Chinese want the property they buy to match the highest standards, while Europeans are more open to redecorating and reconstructing the property themselves.

Clients have their preferences regarding location, choosing mostly properties at the coastline between Primosten and Trogir (especially in Split) and around the town of Dubrovnik. Besides their beauty, these areas owe their popularity to the proximity of airports, motorways, and marinas. When it comes to the islands, the most popular ones in 2018 were Brac and Hvar.

Despite great results, the market has its issues. The most prominent ones are the somewhat closed banks towards supporting investors and the lack of offer suited for clients aiming at luxury properties.

Predictions for the luxury real estate market in 2019

Still, positive market trends are expected to continue in 2019, with expected price growth of up to 10 percent, followed by even greater demand for luxury real estate in Croatia. The start of construction of several tourist resorts with 5-star hotels is expected in 2019, along with some world-class hotel brands to the Croatian market, such as 4seasons and Marriott.

An invitation with the text “Everything Happened on the Square – Galerija Mala” in 1989 marked the beginning of a small yet important gallery in the heart of Zagreb.

At the very beginning, the gallery’s management stated that they would only present the most current production and contemporary art. Galerija Mala was one of the first private galleries in Croatia.

Located between Mala kavana and Ban cafe, Galerija Mala represents the cultural point of the northern side of the main Zagreb square. It acts as a sales gallery of works of Croatian authors and thus promotes Croatian art.

Opened just before the holidays, the gallery started working with the exhibition of Miroslav Šutej, a prominent and popular academic artist whose career was then at its peak. After the holidays, the gallery hosted presentations of the book “Zagreb before the beginning,” the Golden Bule facsimile, the new Zagreb postcards … Thanks to the attractive location, right next to Harmonica, the rich and always up-to-date program, Galerija Mala became an unavoidable place of cultural encounters. Social events are scheduled throughout the year, under the continuous and independent guidance of Mirna Hromatko Reiser.

The gallery space was formerly used by the publishing organization Mladost. For the needs of the gallery, space was rebuilt by the Architectural Design Institute of Zagreb. In just over 40 square meters, this gallery is home to many artwork and activities.  For example, sales and promotion of paintings and graphics, fine plastic, art jewelry, bibliographic and art-related publications, graphic maps, and graphic sheets.

The interior of the gallery is fascinating. The ground floor is dominated by a rock placed opposite the passage, so it’s intended to display paintings and graphics. The second rock is located opposite the entrance and decorated for shelves and showcases. It is suitable for exhibiting other works. The gallery’s central space has remained free so that visitors can see exposed works of art. Since 1989, space has kept all its essential features. It is always painted in neutral white, suitable for displaying all the artwork. 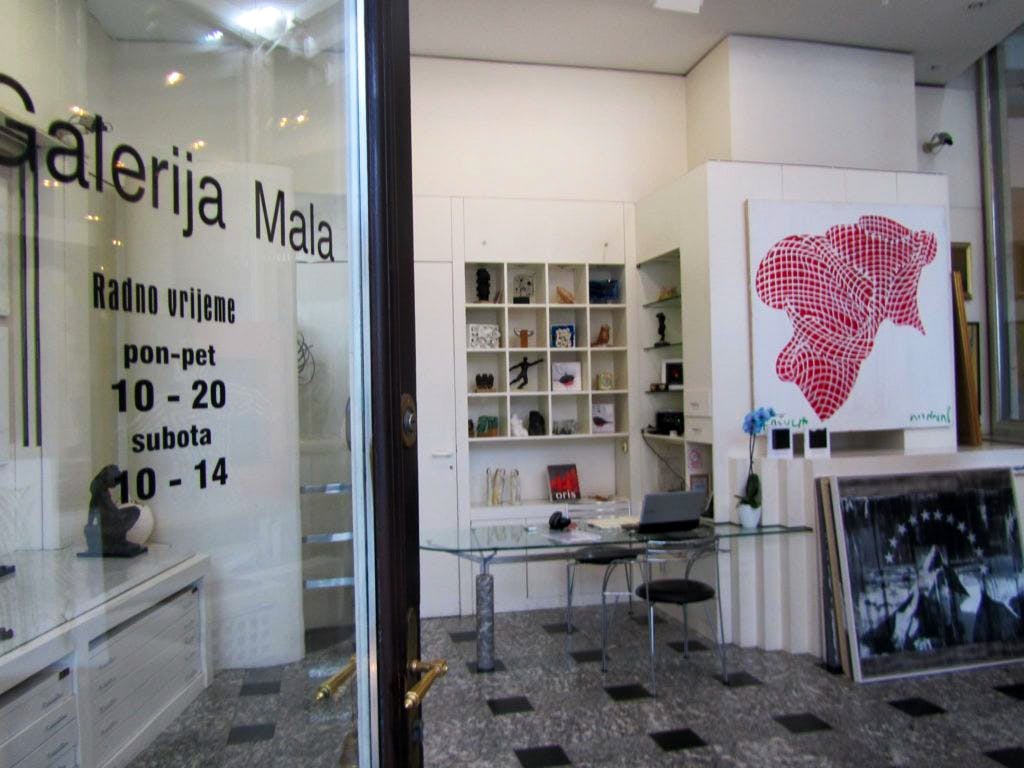 Among many artists whose works were exhibited in Galerija Mala, it is hard to point up anyone in particular. Still, we will mention Nikola Reiser, Marijan Muljevic, Milan Steiner, Luj Logic, Stip Nobil, Vasko Lipovac, and Dimitar Popovic. Particularly noteworthy was the „Kravate“ exhibition, an authoring project by Andrew Seifried, also presented in Zadar and Dubrovnik.

The gallery also receives numerous inquiries from artists living and working in Europe, especially from Vienna, Ljubljana, Budapest, and Venice. One of the Gallery’s goals is to enhance and expand the cooperation with artists and raise the cultural and artistic level, not only of the Gallery but of Zagreb as one of the most interesting tourist European cities.

The Gallery can also boast of participating in numerous hotel and business interiors furnishing with artwork and graphics. Artworks can breathe a whole new life into our everyday living space and refresh it. The leadership of Galerija Mala recognized this a long time ago.